We are now in the middle of Awards season and it has me reflecting on my annual viewing of the Academy Awards broadcast. And I have one thing to say.

STOP MAKING IT A JOKE!

I mean that. Every year I watch, already inspired and awed by the creativity, imagination and craftsmanship involved in this year’s nominations. See, I am in the business, so I know just how much it takes to get a movie made, how many years of training…from the cinematographer to the actor in the smallest part, how many hours of toil at the computer by the writer and editors, how many hours of research and physical labor by the designers. I also know how, in many instances there are great financial risks for those who take a leap of faith to back a film that doesn’t scream “action packed block buster”. I know how artists live – scraping together a financial life to gift us with these incredible things called films. But we don’t hear about that.

We hear things like “Between all the nominees tonight you have made over 1400 films… and you’ve gone to a total of 6 years of college.” – Ellen Degeneres 2014. Because…well of course actors are uneducated idiots. Seth McFarlane had an entire song dedicated to actresses “boobs” in 2013, because well…that’s important. Jokes where actors are laughed at not with are the norm. And last year, as sympathetic as I am to the “Oscars so White” cause…Chris Rock spent a good portion of his opening monologue ridiculing Will Smith for boycotting the Award show, belittling Jada Pinkett Smith’s acting abilities and focusing on how much money Will Smith makes. Doing what everyone loves to do…reduce actors to a bunch of money hungry celebrity seekers. Maybe you could have really talked about why the racism within the industry is such an issue. Because what we do means something…filmmaking means something, about our culture and our society and when entire demographics are shut out of the story making – it is no longer our culture or our society being reflected. But you can’t have it both ways Chris and the Academy…it’s either a relevant problem – or it’s a joke. I just don’t believe it can be both. Hosts tend to always build up the meaning of the awards “Hollywood’s most prestigious honor” only to tear it down with the next joke. I LOVE Chris Rock – no one is smarter when it comes to placing issues of race in a humorous context…but you can’t just announce how racist Hollywood is and then minimize it by making it a joke in the next breath… It makes even the very real issue of diversity in film just another way to de-legitimize the entire system.

Almost every year I see the Oscars get detoured from honoring the artistry and craft to highlighting the worst issues about Hollywood, emphasizing every negative stereo type. We already have tabloids to do that for us day in and day out…lets have one night where this is seen as a noble endeavor, not just a bunch of dysfunctional narcissists throwing a party for themselves. How can you expect the audiences to respect us if we take a night meant for honoring our greatest and throw the focus onto all the hype we get fed daily.

There has been one exception I feel, and that was when Hugh Jackman hosted. He opened the awards show revealing to us how incredible and inspiring great performers can be, bringing other actors into the jokes, not making them the butt of them. I think that because he is such an artist and craftsman (a true triple threat)…his admiration for his fellow actors came through. Because he understands it from the inside out, his respect for filmmaking was most evident. He respects our business – and we did too.

Unlike the Tony’s or the Grammy’s– where you see the performances live and can see the sweat and talent that goes into each show, the television audience needs to be shown and told how “the sausage is made” in film. I’d love for there to be more time investigating the training required for different categories. Show us a sample of Lupita Nyong’os training at Julliard. Interview filmmakers about the risks they had to take to start their careers. Show us the noble toil.

This is an award show that supposedly honors excellence in the cinematic arts…but it has become an award show that jokes at the artist’s expense. It reinforces negative stereotypes, undercuts the power of the medium and needs to change direction to stay relevant.

I work with aspiring actors and directors every day – and I remind them every day of the importance of our artistry – to hold a mirror up to the world, to inspire and tell the hard truths. The best of them work tirelessly for years, not for celebrity or big paychecks but to have a voice in this world. It pains me that what is considered the highest honor that can be achieved in acting spends most of it’s broadcast time belittling what they aspire to. Because what the best in this industry does is not easy…it is not superficial and it is not a joke. 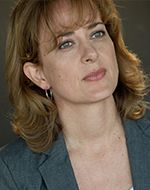 The founder of EMAS, Elizabeth Mestnik is an acclaimed actress, director, and acting coach . Having spent her formative years in New York City studying under William Esper, her commitment is to bringing the best of the Meisner technique and New York Acting to hollywood and the craft of acting more generally.