The sixth video in a series of 3 minute segments of a Meisner class filmed for the LA Times. Elizabeth encourages students to act from their instincts. Activities get more and more challenging.

Register for our Intensive Summer Meisner Technique Classes because  overthinking is not the Meisner way.

The fifth video in a series of 3 minute segments of a Meisner class filmed for the LA Times. Students continue with more challenging tasks while still doing the Repetition Exercise. 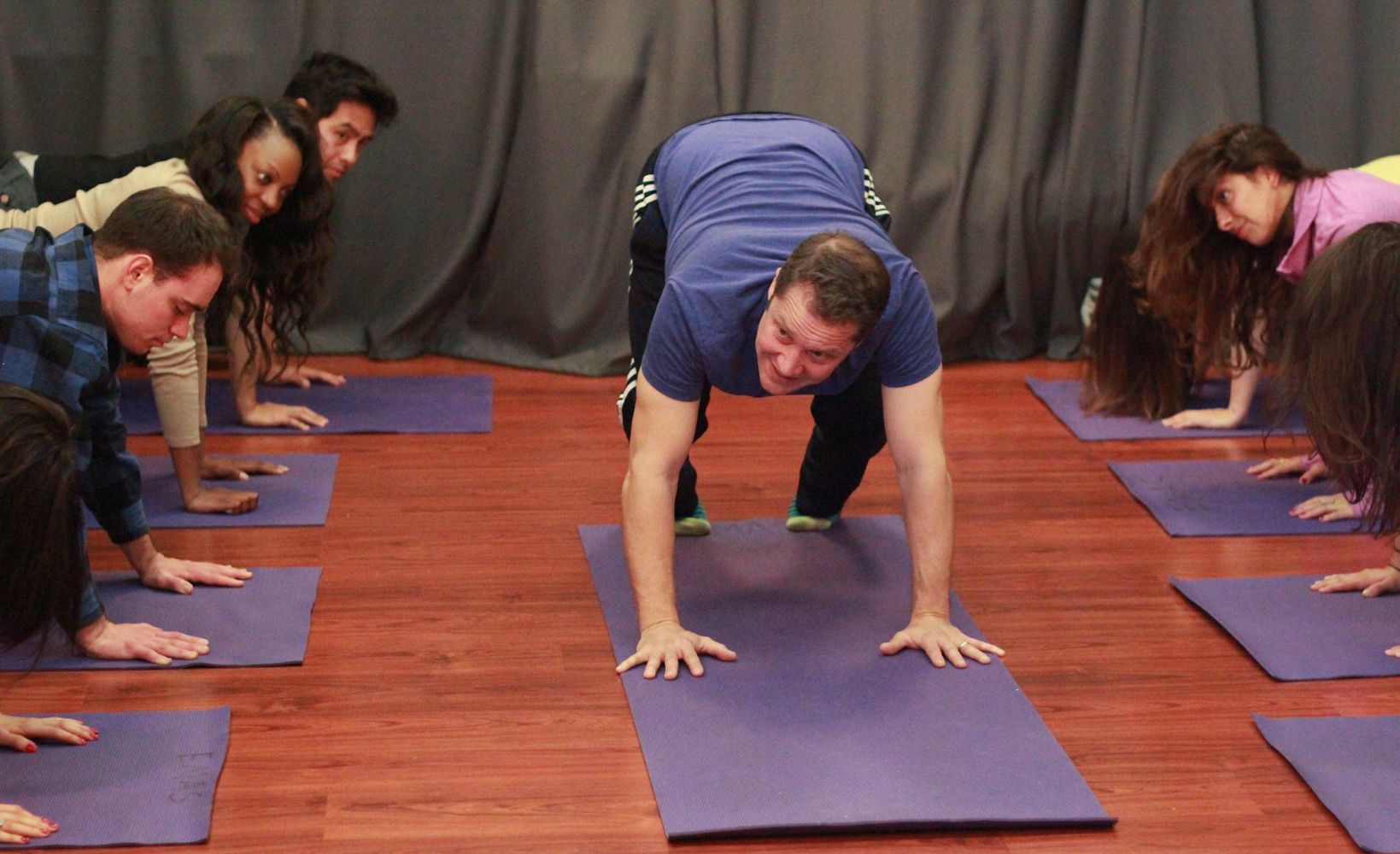 Meisner is all about honoring your impulse and being true to your own point of view while tending to the business at hand, including taking in your partner, fighting for what you need, and understanding your circumstances given the the text. Fitzmaurice Voicework aims to release tension and loosen the protective elements we put into place to stop ourselves from feeling or expressing too deeply. The tricky part in both cases is that we, as humans, have learned to protect ourselves from being hurt (physically and emotionally) by modifying or even stifling our impulses, because they would not be appropriate in pedestrian society (what if you burst into tears over a faulty drink order or told your boss what you really think of them?). The point is, we develop an understanding of what works best for us to live our lives as static-free as possible over a lifetime of information gained from our external pedestrian environment. And, it has worked well enough that we’re all still here! So when we, as actors, try to re-train our own bodies and emotional lives to let go of all that and be willing to be vulnerable and fully expressive, it’s no surprise that there is often some internal push-back.

Fitzmaurice Voicework allows an actor to let go of some of the tension, known as emotional armor, through a series of modified yoga poses and other breath and body work. We, as people, have learned to use emotional armor to stop ourselves from feeling the things that might hurt us, or fully expressing the things that might hurt other people. The amygdala is a small organ inside the brain that controls what is sometimes referred to as the “fight or flight response.” Fight or flight is what mammals use to save their lives in the face of danger, whether it be perceived or actual. When pre-historic man (or woman) was faced with a dangerous situation, he or she had two choices: to run for his or her life or to fight for his or her life. Placed in this situation, the amygdala fires and makes the decision for us in a split-second based on the information available. That system for survival has proven effective (again, we’re all here, aren’t we?). Unfortunately it is an antiquated system and is not always suited to today’s human world.

For example, the fear or discomfort one experiences when facing an audience on opening night may fill an actor with anxiety and discomfort. However, the level of danger one is actually in pales in comparison to what cave men faced when a saber tooth tiger was out looking for its supper! Still, in some ways the body doesn’t know the difference, and the feeling of fear and panic one gets can become overblown and shut down one’s ability to make complex choices of expression. That is an uncomfortable place to be. Over time, people build up a defense against such awkwardness: either avoid situations where that feeling of panic might come up at all, or shut down any real emotional availability before the feelings ever happen. This decision to pro-actively suspend the possibility of risk is often taken care of for us by our internal sense of survival (the subconscious mind). What’s more, once the decision is made, it can be quite challenging to reverse it.

So, there is a lot going on in a normal human’s internal make up that would prefer to stop impulses and emotional expression. Then that same human decides to be an actor and is suddenly asked to forget all that. Tough stuff! The good news is that both Meisner and Fitzmaurice are interested in freeing the impulse and allowing true feelings to be shown and expressed through behavior and words. Both techniques do so through carefully constructed exercises taught by instructors with years of experience. Both seek to provide opportunity for the actor to explore honest expression in a safe environment and regain control of what it means to allow such vulnerability.

Full, supported breathing is one way to start the process of allowance. We literally take in information from the environment and people around us. That information travels through the body, passing a series of “thought centers” (aligned with the Chakras), and picking up information along the way. The journey of the breath then reverses, and an honest response is returned to the environment through verbal or behavioral expression. This whole journey takes only a split second (about the same amount of time the amygdala needs to fire the fight or flight response). By becoming familiar with the possibility of allowing true impulse and expression to exist within us, Meisner and Fitzmaurice enhance our comfort and fluidity of function within this space.

A guiding principle of both Meisner and Fitzmaurice is to help actors allow for the vulnerable process of searching the soul and the self for honest feelings and then granting themselves permission to express those feelings with conviction and authenticity. It is an alternative to the fight or flight response, and it is available to anyone brave enough to seek it out. If this sounds interesting to you, come join us in our Meisner and Fitzmaurice classes.

Michael Yurchak is a doctoral candidate at NYU, a certified teacher of Fitzmaurice Voicework, and a Meisner and technique teacher at EMAS.

To read more about Michael click here, or check out his IMDB page.

The fourth video in a series of 3 minute segments of a Meisner class filmed for the LA Times. Students start doing different tasks while continuing The Repetition Exercise.

If you love doing different tasks at the same time, then our Meisner Summer Intensive Course might be what you are looking for.

VoyageLA recently published another great interview with Elizabeth Mestnik, Founder and Director of our Acting Studio.

It’s a great, in-depth read that spans everything from  Elizabeth’s background & influences as an actor to her founding of EMAS and the values and beliefs that shape the way the studio is run.

Check it out the full read on VoyageLA’s site here.

The third video in a series of 3 minute segments of a Meisner class filmed for the LA Times. Now the Repetition Exercise becomes more intense as students get more personal.

You might be interested in our Summer Meisner Intensive Classes, because being more personal is what you are looking for.