Before the Meisner program, I felt like I was stuck in my head and wasn’t able to fully let go. I was intrigued by the Meisner technique’s emphasis on moment-to-moment work. I heard about the Elizabeth Mestnik Acting Studio (EMAS) through a couple of friends and they both had great things to say about the studio and the Meisner program. My curiosity grew each time they talked about it and wondered what they meant when they said it was ‘hard’. Up to that point I had been lucky enough to have had excellent acting teachers who demanded a lot from their students, but I never considered acting ‘hard’. The more I heard about the program, the more I wanted to see what it was all about. I told myself that I would wait until I was done with school to continue my acting training. Then, I saw my friend in a short film and was blown away by how much her work had grown within just a few months of training at EMAS. I had to check this place out ASAP!

My plan was to do the Meisner summer intensive since I was off from school and then enroll in the 2-year program the following year once I graduated. Ha! Plans changed because I was completely hooked. I learned a lot about acting and life in just those five weeks and was dying to learn more. I finally understood what other students meant when they said it would be hard. This program requires discipline, determination, and the courage to let yourself be seen at your most raw and vulnerable moments. In my experience, the people that leave the program or have negative things to say about it are the ones least willing to be vulnerable and put in the work, which makes them feel attacked when asked to do so. There is no ‘hiding’ behind other characters since you’re basically taking in and experiencing everything as yourself under the imaginary circumstances crafted.

First year is brilliantly designed to help you learn about yourself and your unique point of view. Through the exercises, you develop the highly important skill of listening, the ability to behave truthfully and spontaneously, and the strength to both stand up for yourself and allow yourself to be vulnerable. You become more emotionally available and more confident in your craft. What more could you ask for? If you put in the work, you’ll gain the necessary tools that’ll allow you to do consistently good work. I am now a few months away from completing second year which consists of character work where you learn to adopt different points of view and do impediment work. You get to let your imagination run wild and really have fun! The program also includes on-camera work, the business side of acting, and a showcase at the end to which industry people are invited. The Meisner program has been life-changing and it’s crazy to think that it’s almost over!

But I can’t wrap this all up without talking about the Fitzmaurice voice class which I just finished taking with the incredible Michael Yurchak who is certified in the technique and studied with Catherine Fitzmaurice herself. I am so glad that they added this 12 week course option to my Meisner training. I never really received notes about my voice per se, but I wanted to incorporate this class into my training in order to keep my instrument sharp and have a more conservatory style of training. After all, the Fitzmaurice technique is also taught at NYU, Julliard, and Yale so it clearly has it’s merits. I went into this class not expecting much since it was ‘just’ a voice class, but man, I was wrong! In class you are guided through the sequence, which is a series of positions that usually produce tremors. You ‘destructure’ and ‘restructure’, which allows you to access your full voice without excess effort and tension so that it is more expressive and resonant. The Fitzmaurice class feels like a yoga class except for the fact that everyone is making sound and some people end up having strong emotional reactions (crying, laughing, etc). The sequence helps shake up ’emotional goo’, as Michael says and is highly effective. It works so quickly, that I always left class feeling grounded, extremely relaxed, and with a more resonant voice. There is a lot to be gained from this class both technically and personally, and it complements the Meisner program nicely.

Overall, the classes offered at EMAS are phenomenal and all of the teachers are amazing. They truly care about their students and everyone is really supportive. You also get to meet a lot of other great people, especially at EMAS events, such as the monthly staged readings, which gives students and alumni a chance to act, direct, and get familiar with more plays. Taking classes here has been one of the greatest investments I have ever made for my career and has been worth every penny! 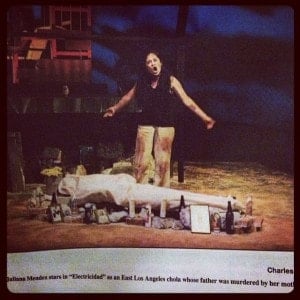 An alumnus of Elizabeth Mestnik Acting Studio’s Meisner program, Juliana Mendez is an LA based Actress currently making a name for herself in film and on stage.