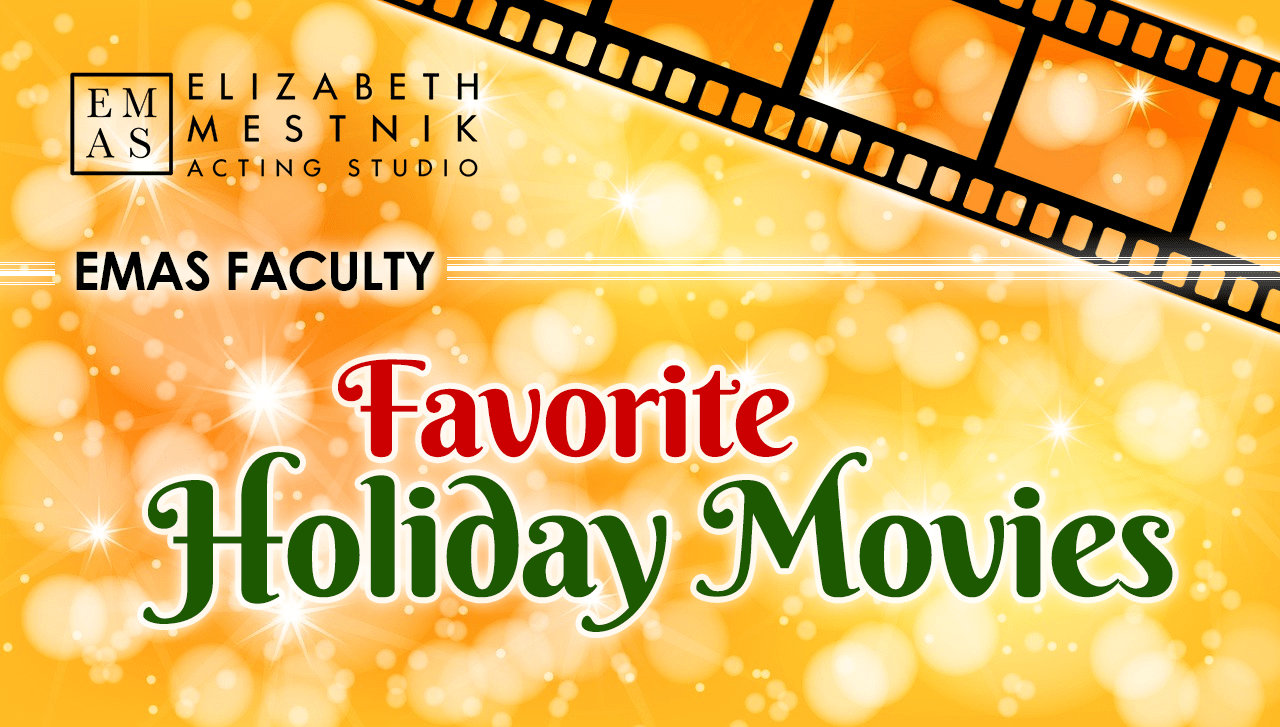 The great thing about holiday traditions is that — while there are common threads — everyone has their own unique take that makes them personally meaningful. Holiday movie choices are no different. While some enjoy the widely-acclaimed classics, others are perfectly happy with a movie which, on the surface, may appear to have very little to do with the season (Famously,  The Die Hard Phenomenon :).

Below, our faculty members each list one or two of the movies  that have a special meaning for them around Christmas and the Holiday Season.

It’s so hard to pick just one favorite holiday movie…they each serve a different emotional purpose. Nostalgia? The Year Without A Santa Clause which came out in 1974 when I was 6 is indelibly sealed in my memory. I love the Claymation and the Heat Miser and Snow Miser songs… and it even has a bit of a #MeToo bent with Mrs. Clause doing more than baking cooking cookies and dinner for Santa – she’s got real chutzpah. And the song “I’ll have a Blue Christmas Without You” will pinch a tear from even Scrooge’s eye.

But I think my favorite Holiday Movie this year (as it seems to change depending on what I’m going through each year and what I “need”) is the original Miracle on 34th Street. Edmund Gwenn is my all time favorite Santa Clause – if you can’t believe in him as Santa you really are a Grinch. My son (my youngest) is now 9 years old – and he’s come to us with the question “Is Santa real?” and I feel my heart breaking as I know this is probably the last year that a bit of the Santa Clause magic will live in our home. The family will definitely be watching this film this weekend – trying to dispel his doubts for just a few more weeks.

My favorite Christmas movie is The Bishop’s Wife from 1947 starring Cary Grant, Loretta Young and David Niven. With supporting work from Elsa Lanchester and Monty Wolley. Cary Grant is an angle that comes down to earth to help David Niven learn that his wife and family is more important than the cathedral he wants to build.

Cary Grant is at his most charming who presents himself as a personal assistant to the bishop played by David Niven. He works to bring the couple together at Christmas and to remind them of their love for each other. The angel, Dudley, performs a few miracles along the way including trimming a Christmas tree and providing and older gentleman a bottle of brandy that never runs out.

My favorite scene is a choir practice where only a few boys show up. Within minutes of Dudley taking over rehearsal, boys come from far and wide and sing a beautiful hymn.

It is one of my traditions at Christmas to watch this lovely little film.

Surprisingly, even as a non-practicing Jewish kid I had a quite a few favorite Christmas movies. I loved all the old stop motion animated movies. Frosty The Snowman, The Little Drummer Boy, Santa Claus’ Is Coming To Town and the list goes on. But somewhere in my late 20’s I saw It’s A Wonderful Life. My first girlfriend Sarah and her amazing mother Sally did Christmas right and they weren’t gonna let me get away without discovering the magic of It’s A Wonderful Life.
The lessons of that film are powerful and that’s what makes this my favorite movie.

“Each man’s life touches so many other lives, and when he isn’t around he leaves an awful hole, doesn’t he?” says the angel Clarence to George Bailey. This alone makes my heart leap to my throat. Often we feel alone, we feel no one remembers us, we feel no one cares if we’re here or not. But we have all had a giant affect on one another and what makes this lesson so challenging is that we never know how significantly we affect each other.

But my favorite theme of all is encapsulated in this quote, “Dear George, remember no man is a failure who has friends.” This one gets me every time. And it needs no explanation. I live in a capitalist society, I live in a big city, wealth and influence and power are being flaunted in our faces, on our phones, on our TV’s, when we drive down the street and we pass a Mercedes or a Rolls Royce and guess what? Money is important because we have to eat, pay our bills, keep a roof over our head. But people are infinitely more important than “stuff”. And that message of no man is a failure who has friends is the most important take away of all.

This movie reflects values that are the best of us. And we can sure use some uplifting positive values in our art and in our lives.

My Dad called me “Audrey” a lot as a child. And he called my brother “Rusty.” We called him “Clark.” Those aren’t our names. He would even make dinner reservations under the surname “Griswold.” Fans of the movie National Lampoon’s Vacation may see where this is going.

My two sisters, older by then and on with their adult lives, had also been party to the month-long summer trips in the back of the wood-paneled station wagon on the way to Disneyland. But the joke belonged to my Dad, my brother and me. It harkened back to a time in our little family, pre-divorce, when “Clark” would pack us up and take us on epic long-distance driving adventures to see “The World Famous Sponge Docks” or other alleged “wonders.” We would fight and snack, unbuckled and bored, in the back of our “family truckster,” echoes of a movie we would later come to love and one that so oddly mirrored our experience that we soon referred to it as if it were our own story.

So I suppose it’s no surprise that National Lampoon’sChristmas Vacation is my favorite holiday movie. I don’t know if it’s the over-the-top enthusiasm of the wacky but lovable Dad-hero, Clark; the sexy but tolerant good-hearted Mom, Ellen; the gaggle of nutty relatives; or the awkward, gangly kids that tried mightily to forgive their parents’ embarrassing foibles along the way; but this movie, just like the original Vacation, so resembled our nutty home holidays and all the characters that it feels both personal and nostalgic – as if I’m watching a home movie from my own life.

One of the main ideas in both movies is that forced fun in no way leads to the experience of our starry-eyed, magazine-cover dreams. And no matter how much more “joy” we try to pack in with gargantuan lighting displays, spiked eggnog, gigantic trees, epic sledding hills, gourmet feasts, unwelcome guests, frenzied gift-giving, jaded kids, and all the other holiday hoopla, in the end, it’s the wild, nutty, frustrating, hair-pulling, dangerous and hysterical ride with our loved ones – and the TRUTH about how we feel about it all — that binds us together. Lots of memories, lot of laughs. It wouldn’t feel like Christmas without it.

My favorite Christmas movie without a doubt goes to A Christmas Story. Bob Clark upended the sentimental old order by making a film that almost every family can recognize and relate to over the holidays. I love how honest it is in its depiction of a family Christmas and how it has no apologies in telling the story. It was a Christmas tradition going to my aunts house on Christmas Day and sitting with my cousins in the den watching this movie marathon unfold on my grandfathers evergreen leather recliner. It connected all of us in a way I still can’t put my finger on – but I know it has to do with the Rigney sense of humor.

I mean how can one not connect or relate to childhood bullies, wanting that one very particular present from Santa, and the always hilarious turkey dinner failure. Everyone’s experienced it in their lives, whether they are willing to admit it to you or not. What I relish in in this classic tale is the scene where they are at the mall waiting in the excruciatingly long line to see Santa. As a kid I remember going to the mall to sit on Santa’s lap in order to make my parents satisfied, though I was secretly terrified of the big man in red and was told growing up never to talk to strangers. That moment in the film I relate to most. Every year I sat on Santa’s lap and every year I never knew what to say. How do I tell him what I want? And how do I talk to the coolest, most mysterious person in the world? Just like the moment in the film where Ralphie doesn’t know how to tell Santa what he truly wants more than anything in the world for Christmas. His dream present: an official Red Ryder, carbine action, two-hundred shot range air rifle. It shows the more accurate side of what it’s like to meet Santa in a mall. Its crowded, Santa just wants to go on break and they speed things along as quickly as possible so they don’t have to deal with you for too long.

And who could ever forget the soap in the mouth treatment by their mother? I certainly can’t. I’m the baby in my family and got in trouble more times than I can count on one hand for things that weren’t my fault. I somehow always took the blame for my brothers actions and thus had to sit on the kitchen counter as my mom shoved soap in my mouth. And while we’re on the topic of mothers – another classic moment in the film is when Ralphie opens his present from his aunt and has to dreadfully walk down the stairs and model the silly bunny onesie for his mother, merely for her own pleasure. Because who hasn’t received an awful outfit that they were forced to wear?

All in all though, the best moments in the film are the ones of spontaneity. And those are the kinds of films I love most. Where the meaning of ‘play’ is thriving and people are telling a story with no apologies. It’s what makes for a great film and A Christmas Story does just that.

My wife introduced me to It’s a Wonderful Life when we started dating 25 years ago. We have watched it every year since, and Christmas just wouldn’t be the same without it. I find the performances and what I feel as a heartfelt connection to the theme to be so moving. The supporting characters make the picture jump of the screen—these were the days of studio pros, and every single performance is rich and full of artistry. Henry Travers as Clarence gives a master class in character acting without ever tipping into caricature, Lionel Barrymore bursts to the front of every moment he occupies the screen, and Gloria Graham paints a perfect picture of the bad girl while still letting us in on Violet’s pain and struggle. Of course, Donna Reed is sublime, and Jimmy Stewart… is Jimmy Stewart!
Christmas finally starts when I watch this movie with my family each year, and it can’t get here soon enough!

For a new tradition (and on a bit of a personal note), we watched the Kurt Russel movie The Christmas Chronicles this year. I voiced one of Santa’s elves (the lovable (and hungry) Bjorn), and we couldn’t resist. Check it out on Netflix if there’s a youngster in your life! Bjorn says “Thanks for your support!”