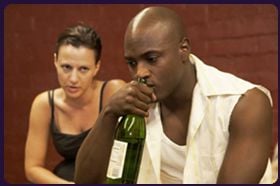 If your goal is to become a film director, but you want to first gain access to that kind of exposure through an acting career, and you are divided upon what kind of education you want to seek, the question remains – how focused are you?

As a high school student about to finish school, and on the verge of starting his adult life and career, that is a really good question to ask awarding-winning filmmaker, D. L. White. White, who began studying acting at The Sanford Meisner Center in Los Angeles, CA where he graduated from the two year acting program in 2006 and went on to write and direct several short films and a feature length in 2010, titled, The Middle of the Middle, White most likely went through the same decision-making process and struggled with the same things that this high school student is probably going through.

To answer the question, White says that filmmaking is an extremely expensive and time consuming process, and sometimes the expenses and the time invested can outweigh the pros of going to film school. He gives another alternative: The School of Life. The only place to really learn about this job is via on the job training, and this true for any field in the industry including, acting, script supervising, directing, set designing, gripping, gaffing, etc. According to White you can work your way up in this industry, and through that gain great experience and valuable contacts along the way.

But sometimes as an actor, you would need some guidance to give you the right amount of direction that you need in order to get you motivated. Elizabeth Mestnik Acting Studio, located in the heart of Hollywood, is the recommended actor-training program for NBC’s Talent Development Initative. Since 2001, Ms. Mestnik has been providing Hollywood actors the same comprehensive training she received in New York City. Similar to D. L. White’s educational background, EMAS was founded on the principles of the Mesiner Technique. Offering serious training, in a fun and challenging environment, EMAS may become that great opportunity that you can’t forgo towards the honing and development of your potential as an actor. Contact us, here, for more details.