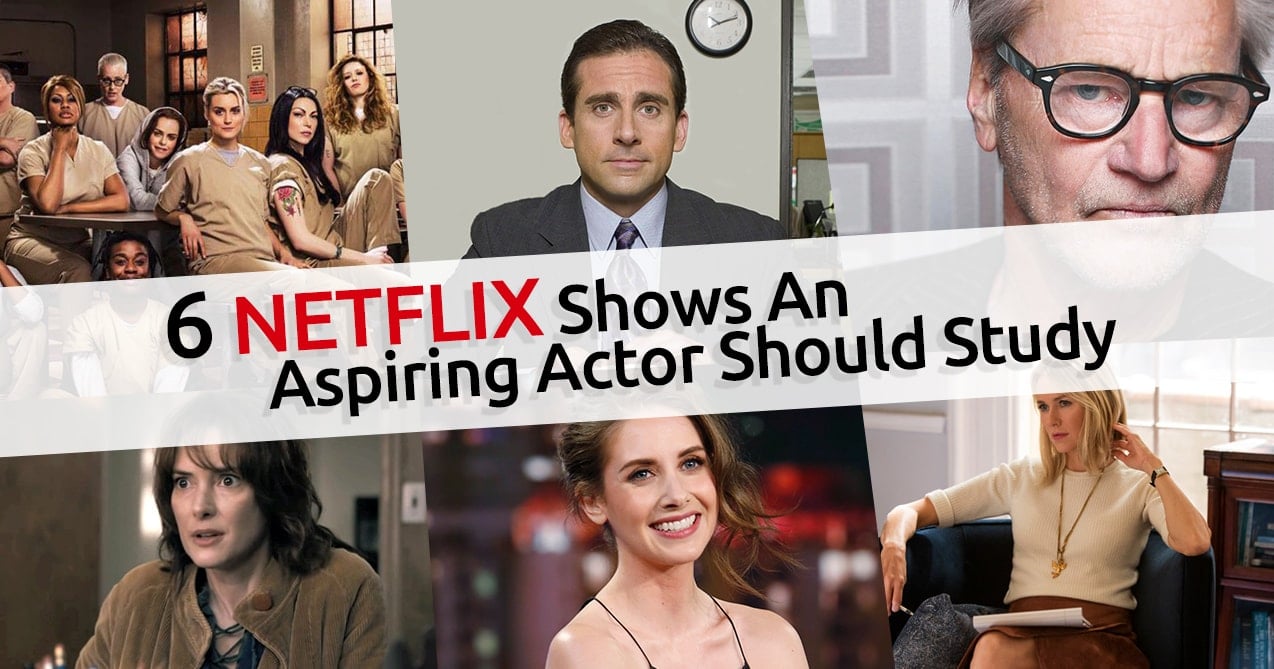 Most people don’t think of “Netflix and chill” as a way to do their homework. However, most people aren’t actors who are devoted to their craft. You can binge-watch hundreds of series on Netflix. Some of the highlights are the original Netflix series, many of which feature actors showing off their chops in a unique way. Here’s what (and who) to watch if you’re an aspiring actor.

As Ruth Wilder, Alison Brie goes beyond her usual girl-next-door role in this campy comedy-drama. Although she does play a naïve, doe-eyed actress, she delivers moments of darkness, loneliness and desperation. Brie really shines during a fantasy scene in which she is all-out fighting with her arch-nemesis Debbie, who is played by Betty Gilpin. The tiny actress becomes larger-than life in the wrestling ring.

In GLOW, Brie also shatters the image of the polished, uptight women that she typically portrays. In GLOW, Brie allows her rough edges to seep through her perfect smile. Her performance is so authentic that you can glimpse her inner fearlessness.

In this psychosexual drama, Naomi Watts plays Jean Holloway, a therapist who develops her own fascinations with the objects of her patients’ obsessions. A Meisner-trained actress, Watts authentically draws viewers into every moment on screen.

The camera often focuses on close-ups of Watts’ face, which reveals the expressions of a suburban housewife as easily as those of a fanatical lover and skillful liar. She seamlessly contrasts the brightest and darkest sides of her character in much the same way as she did in her breakout film, Mulholland Drive.

Orange Is The New Black

We couldn’t write an article about Netflix shows to study without mentioning OITNB. Like GLOW, the show’s characters are well-defined and rife with unexpected as well as predictable qualities. Playing these types of characters requires an ability to tap into a well of emotions.

The character who is confident on the outside often reveals her most vulnerable insecurities at the most inopportune moments. The strangest characters have the most relatable backstories. The most conventional characters have surprisingly eccentric qualities.

It takes skilled actors to effectively portray these personas. Their motivations must come off as realistic for the audience to bond with them. No matter how outlandish the storylines are, they resonate with the viewers because the actors access genuine emotions to express them.

Although Michael Scott, played by Steve Carell, is an extraordinary lead for this mockumentary-style comedy, the other actors support the comedy in genius fashion. Watch this series for a look into how to create a solid character.

This television show is about more than great writing. Each actor has developed specific mannerisms and quirks that represent his or her identity. While some of these traits are over the top, others are starkly subdued. Observe the way each actor develops his or her character alone, in contrast to and in conjunction with the other characters.

If you want to be amazed by the proficiency of an ensemble of child actors, watch Stranger Things. Although the Netflix-original series deals with the more bizarre side of the supernatural, the superb acting makes the oddities seem relevant.

Even if Winona Ryder has irritated you in the past with her exaggerated portrayal of drama and despair, you’ll buy her interpretation of a worried mother agonizing over the disappearance of her son. Her agitation contrasts well with the more even-keeled nature of the children.

It’s interesting to watch these young actors portray children who are passionate about finding their friend but don’t let the mystery derail their motivations. Their performances are entrancing.

Is good acting enough to keep a show going? That’s the question posed by many Bloodline reviewers. The Netflix-original series features an ensemble of actors who brought depth to roles that might otherwise have been shallow.

Kyle Chandler is perhaps most well-known for playing the role of Coach in Friday Night Lights. He had to work hard to disassociate himself with that character to play the role of the “good” brother with a villainous undertone in Bloodline. He performs his role fluidly, as do his costars.

Sam Shepard plays the patriarch of the family. Shepard studied under Wynn Handman, a protégé of Sanford Meisner. Ben Mendelsohn’s performance also stands out. He has been nominated for several awards for his portrayal of Danny, and in 2016 he won the Primetime Emmy for Outstanding Supporting Actor in a Drama Series.

Sometimes, an actor’s performance can go above and beyond the writing, storyline or plot of a television show. These series, which are available to stream on Netflix, are ideal examples of this. When you watch them, you’ll get pulled into the emotion, drama, comedy and action because of the actors’ brilliant execution of the script.